Gentle Touch vasectomy represents an improvement over No-Scalpel Vasectomy because the Gentle Touch Vasectomy technique does not require a needle to administer local anesthesia.

During a Gentle Touch vasectomy:

The vasectomy is performed in less than 10 minutes without removing any tissue and using an open-ended technique. The down time is minimal and most men can be back to normal activity after 48 hours.

These techniques, when used together, allow men to have a vasectomy that provides the quickest recovery time, lowest complication rate, and least amount of pain when compared to some other vasectomy techniques.

Each section below expands to provide greater detail about Gentle Touch Vasectomy.

How is vasectomy performed at A Personal Choice?

Dr. Monteith only offers Gentle Touch Vasectomy. This is the most minimally invasive vasectomy performed through a single small, midline scrotal incision without using a needle or a scalpel. Each vas deferens is divided and fascial interposition is performed. The upper portion of each divided vas deferens is sealed with light coagulation (heat energy) and the lower portion of each divided vas deferens is allowed to remain open rather than intentionally closed. This is considered an open-ended vasectomy technique.

This type of vasectomy (coagulation with fascial interposition) has been demonstrated to have the lowest failure rate and the lowest complication rate while offering the least amount of pain and quickest recovery.

Dr. Monteith performs the vasectomy in the office using local anesthesia in less than 10 minutes. No tissue is removed or excised during a typical vasectomy. Dr. Monteith’s patients leave the office with the same items they brought when they came to their appointment!

How is a vasectomy done without a needle for anesthesia? Dr. Monteith uses bupivacaine as a local anesthetic. Bupivacaine  provides longer pain relief for up to four (4) hours.
Most men will not experience significant pain after the anesthetic wears off.

How is vasectomy done without a scalpel? 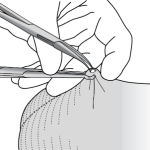 The no-scalpel technique is accomplished by using a small pointy instrument, a no-scalpel dissector, inserted into the anesthetized skin. This instrument is used to spread a small opening in the scrotal skin. Typically only one small opening is made in the center of the scrotum and this opening is typically no larger than an aspirin tablet. This area will usually heal closed within 3 days without the need for any stitches.

The anesthetized vas deferens can be easily elevated through the small incision.

How is each vas deferens divided? Each vas deferens is divided using a small hand held battery device called a coagulator. This device quickly divides the vas deferens and seals any small blood vessels, which could contribute to bleeding. Portions of the vas deferens are not removed during a typical vasectomy procedure.

Minimal coagulation of the inside of the upper end of the vas is performed to accelerate closure of the vas and minimize the risk of vasectomy failure. Coagulation is accomplished by inserting the tip of a small hand-held, battery powered heating device into the upper most portion of the vas (proximal portion). The device is inserted into the opening of each proximal vas for about ¼ inch and heat energy (coagulation) is briefly applied to the inside of each proximal vas deferens.

Minimal coagulation is preferred over extensive coagulation to better accelerate closure, minimize extensive tissue damage and inflammation, and to minimize the risk of vasectomy failure.

What is an open-ended vasectomy?


An open-ended vasectomy technique is performed by not closing the lower end of the divided vas deferens
(the testicular end). This end is allowed to remain open.

The open end will serve as an outlet for sperm that are constantly being produced by the epididymis. As sperm are produced and travel up the lower vas deferens, the sperm will gradually exit from the opened end. The body will then encapsulate (contain) the sperm at the very end of the opened end of the bottom portion of the vas deferens during the healing response. This encapsulation usually results in a small pea-sized nodule that is technically a small granuloma (healing tissue). The granuloma will function as the ‘recycling center’ for sperm. Sperm will be degraded by WBC’s and reabsorbed in this recycling area.

What are the advantages of an open ended vasectomy?

Open-ended vasectomy has been suggested to result in quicker recovery and less discomfort after vasectomy and less inflammation in the epididymis than a closed end vasctomy. Open-ended vasectomies have been suggested to result in a higher chance of sperm recovery success after vasectomy reversal because the sperm making epididymis undergoes less disruption and inflammation after the initial vasectomy procedure.

What is fascial interposition? Fascial interposition involves separating the divided ends of each vas deferens by interposing healthy fascial tissue between the two ends. This technique minimizes the chance the divided ends can come into close contact and possibly reconnect.

This photo provides a great demonstration of fascial interposition when performed as a closed ended vasectomy with suture.

When I perform vasectomy the lower end is allowed to remain open and fascial interposition is effectively accomplished with  one or two small titanium clips. Using clips allows the procedure to be performed more quickly and with less risk of trauma and bleeding than can occur using suture. The titanium clips are small, non-reactive, and are difficult to feel after a vasectomy.